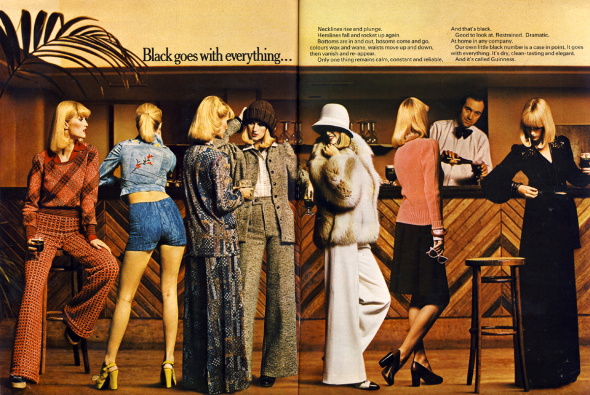 No Comments on Good things on the Internet: swingin’ sixties and seventies editionPosted in fashion, film, ineffable beauty, pop, rocknroll, teh internets By timmukyPosted on December 4, 2013Tagged featured

Here, presented without comment, a selection of images from what in my humble opinion is one of the Best Blogs Ever.

Liz Eggleston’s impeccably and indefatigably curated collection of sixties and seventies images–the glorious, the tacky and the gloriously tacky–mainly from her own scans of British and French magazines, is an unspeakably great treasure. Her focus is on the British Boutique movement, but she confesses to being inspired by “the weirder, even seedier, aspects of popular culture.” This is the kind of amateur (in the French sense) labor of love that the pre-listicle era Internet promised, but really didn’t deliver…. Good things on the Internet: swingin’ sixties and seventies edition

I have a theory that only people who don't regular cook or prepare household meals dislike leftovers.

a prescient article from Jan 2021;

"Senator Cruz, like you, I am, and I think the administration is, very gratified to know that Nord Stream 2 is now, as you like to say, a hunk of metal at the bottom of the sea."

This is a massacre.

And not one word of condemnation from the "international community".

It is absolutely grotesque and unacceptable that European countries and Uncle Sam have so much money to spend on weapons, while many of their own go hungry and can’t afford to pay the bills because of their reckless foreign policy. This shows you where their true priorities lie.