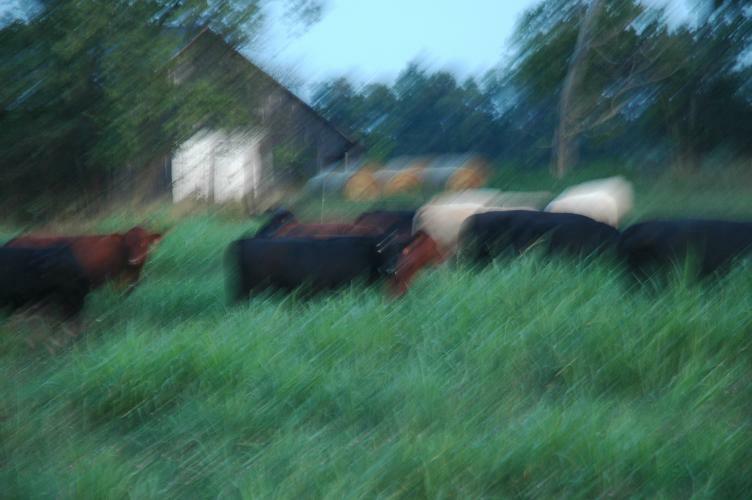 No Comments on Crepuscular étudesPosted in family, farming, remembrance By timmukyPosted on April 24, 2015Tagged featured

Crepuscular. I love that word and always have to look it up.

I posted this on Instagram yesterday, and it led to comments from friends as far afield as Minnesota, Brazil and Australia. Genevieve in St. Paul declared it “word of the day,” and Dan in Sao Paulo informed me that crepuscular is a common Portuguese word, which I didn’t know, but it makes sense. Saudade has no direct English translation either.

Then Ricky chipped in from Corrimal.

Personally, I’m quite fond of dawn and dusk, they have a bit of a mystic feel. The changing of the light is always interesting.

…I love the outline of the cow…. The filigree quality of the trees against the light is beautifully delicate, and the warm glow on the horizon sets the middle ground of the frame, but it’s the presence of of the animal and its lack of complete definition that brings it all back to earth.

I didn’t know I had done all that, but … yeah. I hadn’t wanted to explain the shot too much, Ricky’s interest in it led me to confess to what I was really after.

I was actually photographing that cow more that the entire scene. She just lost her calf yesterday morning. It’s been my experience that cows don’t quite get it when their calves die, especially when they get taken away (and the Dead Truck came around in record time, a mere 15 minutes after I had called). So typically the mama bellows for the calf for a couple of days. She comes up to me accusingly and bellows with special ferocity, as if to say “where’d you put my calf!??!”

Ricky: With my tendency to anthropomorphise, I couldn’t do what you do, Tim.

Me: Well, you harden over time I guess. Yesterday I took the opportunity to ship off two of my favorite old cows as well (they both had udder problems and couldn’t nurse their calves, and one had chronic hoof issues). They got onto the trailer like humans stepping onto a bus, and when we opened the gate, both trotted gamely into the heart of the cacophonous stockyard labyrinth.

I felt a bit of a pang, but turned and let ’em go.

When I told my daughter we had sold the big red cow with the horns, she was very upset with me. Well back to the drawing board I suppose

BREAKING: @SpeakerPelosi says she is running for reelection in 2022, ending speculation she might retire.

Wow – China just built more offshore wind capacity, in 2021 alone, than the rest of the world had managed in the last 5yrs put together

Its 26GW now accounts for half of the world's 54GW total

Critics of NATO expansion anticipated the negative Russian reaction before it happened. Kennan called it a decade before the Bucharest summit. Was he an apologist for a leader that wasn't yet in power? Give me a break.

Yesterday, Congressional Democrats urged Biden to change how the US kills people from the air. Here's my story about where thing stand👇

I also want to recap how much we've learned from @nytimes.

To be blunt, the Pentagon is out of control... 🧵 /1 https://www.businessinsider.com/why-biden-wont-put-an-end-to-drone-strikes-that-kill-civilians-2022-1