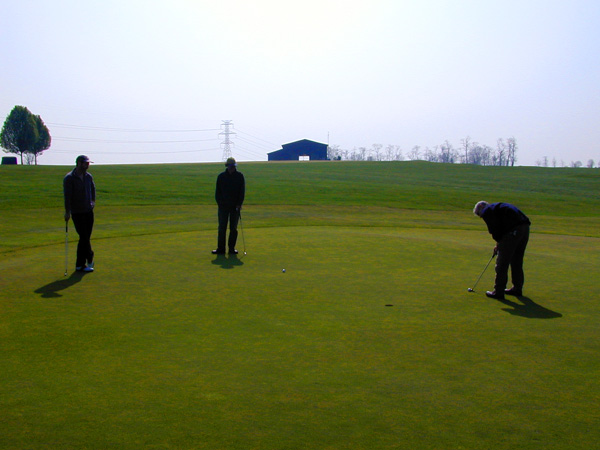 By timmukyPosted on September 24, 2012Posted in ineffable beautyTagged featured, golf, personal, ryder cup, small victories10 Comments on Dead people who haven’t died yet, or Notes on the shameful sport of golf Saturday I had whipped myself into a keen sense of anticipation to play in the first-ever competition between the place where I play golf and another place where people play golf.

If I called them “clubs” you would think there was something exclusive about them, but they are open to all. I guess there’s a pretty lax collared shirts/no denim code, rarely enforced. Think country clubs are garbage? So do I.

I’ve played plenty of informal golf games–skins with buddies, local charity scrambles–but I had never been in a proper competition, where mulligans can’t be given or bought, and where your opponents are entitled to stand silent while you have to sweat out the slidy four-footer you ran past the hole.

This was to be modeled on Ryder Cup competition. Fourball the first day, individual matches the next. My teammates decided we would all have to buy two team shirts in different colors: yellow Saturday, green Sunday. For me that was almost a deal-breaker, but we at least were allowed our own choice of headgear.

So  … totally stoked! But on Saturday morning, while warming up, disaster struck. My back went into spasms, and I could barely bend to touch my kneecaps, let alone my toes, or swing a golf club. My partner had to load me into my car.

I drove home and watched football on TV flat on my back. I was hugely resentful of all that mobility as I lay there sucking bourbon from a sippy cup.

Was pretty certain I wouldn’t be able to play on Day Two. But lo, I awakened, and the back wasn’t too bad. Lots of stretching and ibuprofen. While still sore, the mobility had returned. I could play.

My opponent marked his balls with little blue crosses (“I’m playing the Jesus balls”). Oh here we go, I thought, but there was no follow-up proselytizing. In fact, Rick turned out to be an extremely nice guy. Super intense, he really wanted to win, as I did, and our match was entertaining.

I drove to the fringe on the short par four third, then almost chipped in. I was two-up at the turn. Rick got one back with an insane reversal birdie from nowhere on number twelve (topped drive, 210-yard three-wood to three feet!). We then had four straight tense halves, both of us playing better with each shot.

On sixteen, I had two feet straight uphill, and Rick had a four-foot slider. He said “good-good?” with a little sideways grin, and I blurted out “sure.” Which surprised him. AND me. What the hell are you doing? If I made and he missed, that’s the match! Maybe it was a stupid thing to say, or MAYBE I was enjoying the match too much and didn’t want to win or lose on a missed short putt. Perhaps that was karmically good, because on the next hole I lagged a 40-foot downhill putt with 10 feet of break to six inches, and he couldn’t get up and down.

So I won. Hat off. Shake hands. That weird southern backhanded pat on back. Our team won too. Down a point after the fourball, we got six of the eight possible points on Sunday. And there was rejoicing, of a sort. Nobody whooped it up or trash talked. We were the mature guys or at least the older ones, median age forty-eight or so, while our opponents were generally younger, more athletic, long-hitting hotshots, median age 28. (I think some of them might have whooped, given the chance).

A gang of golfers from both teams assembled above the eighteenth green to watch the final matches.

A late September afternoon in central Kentucky, in the sky a scattering of silvery sun-specked clouds, the visuals partially courtesy of the coal-burning EW Brown Generating Station just across the Dix River from the course. The shadows dappled faces wrinkled and/or reddened by a lifetime of drink and/or high blood pressure.  One opponent had a bucket hat covering a large bandage over his ear where he had a tumor removed. Another couldn’t play as he was recovering from a liver transplant. I didn’t know everyone’s story, but knew for certain more than a few of us were getting treatment for cancer.

I think it’d be safe to say the group skewed 90 percent Republican, with maybe a sprinkling of centrist Democrats. If we ever started talking politics, it would get ugly in a hurry, but we never would.

We joked about spraying each other with champagne as the real Ryder Cup team winners are wont to do, but there was nothing like that. I had brought along my bourbon sippy cup for medical reasons, in case the back really flared up, but it never did. Now my warm Old Heaven Hill was as good a celebration drink as I could muster. Others sipped on Michelob Ultras or Ale-8s. Almost everyone was smoking.

The winning team had its picture taken with a tiny cup. I am hoping that photo will still be hanging on the clubhouse wall long after I am gone from this earth.

When I got home my kids hugged me and said “Congratulations, daddy. You’re the champion,” because they felt my extreme disappointment on Saturday–and because Heather probably told them to do so. And because I am still in that sweet spot in parenthood where your children have an unwavering belief that you hung the moon.

I know we are leaving our kids to a world that will only get hungrier,  meaner, more dangerous for them, and their children. And you could make the case that instead of using every ounce of energy to make their world better, spending time on the golf course isn’t exactly helpful. I could not really make a coherent challenge to that.

Louis CK has a quip something along the lines of  “We are all dead people who haven’t died yet.” It’s kind of pathetic, but celebrating this tiny victory in a meaningless game, played by grown (and rapidly aging) men, combined with the autumnal vibe–well, it felt a little Chekhovian, the end of something.

It was also, it must be said, more than a little euphoric.  Yesterday, bathed in that golden dusk light, it really did feel amazing not to have died yet.

Who else agrees with them? ✋🏾

Aired only once in 1998 on the live SNL show for which it was written and effectively banned and never aired again.

What did Ron DeSantis do at Guantanamo?
#Guantanamo #RonDeSantis